‘Eco’ blocks and ‘super’ crops: The best green innovations of the week


Eye-catching and potentially transformational innovations that could help businesses and nations accelerate the transition to a low-carbon, resource-efficient economy are emerging every week. Here, edie rounds-up six of the best.

This week’s innovations could drive significant sustainability progress within the food, built environment and energy sectors

It has undeniably been one of the busiest weeks of the year for edie’s editorial team, who have just returned from Birmingham after edie Live 2019. Hosted at the NEC on Tuesday and Wednesday (May 21-22), the two-day show saw more than 200 sustainability, CSR and energy experts taking part in 36 panel discussions across four theatres, with thousands of professionals in these areas taking time out of the office to hear their insights.

While we were busy writing exclusive content, posting live updates and meeting readers and leaders over the course of the show, innovators across the globe have been busy developing or scaling up solutions which could help businesses and nations deliver on the event’s theme – turning their green ambitions into ACTION.

Here, we round up six of the most promising concepts, products, systems and processes which could help these actors in delivering a sustainable future, today. 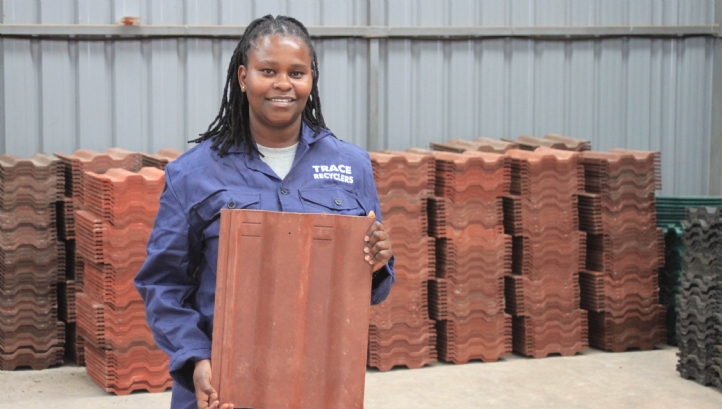 Many developing nations are struggling with plastics pollution and inadequate housing simultaneously. The problem is particularly pronounced in Africa’s Sub-Saharan region, where plastic packaging collection rates are stagnating at 10% and 53 million citizens are believed to be living in slums.

In a bid to tackle these two challenges simultaneously, entrepreneur Hope Wakio Mwanke launched a range of low-cost building bricks and roof tiles made using post-consumer recycled (PCR) plastic and crushed glass waste. Called Eco Blocks & Tiles, the products have recycled around 56 tonnes of littered plastic since they first went on sale in 2014, with Kenyan residents and businesses having purchased 75,000 roof tiles to date.

This week, Mwanke received a $50,000 grant from Mondi in order to scale up her business’s operations. The funding was given under NGO One Young World’s Lead2030 scheme, which pairs up large corporates with startups in a bid to drive more rapid and joined-up progress on the Sustainable Development Goals (SDGs) agenda. Mondi estimates that the funding will help Eco Blocks & Tiles to expand its production 20-fold, enabling it to 200 tonnes of plastic waste annually by 2024. 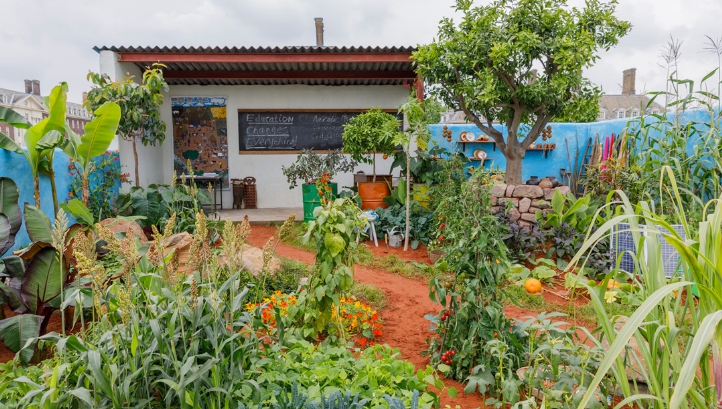 The global food industry is estimated to account for a quarter of global carbon emissions and is commonly cited as a key contributor to issues such as large-scale deforestation, fires and human rights abuses in developing nations.  If the world is going to support the 10 billion people predicted to be living here by 2050  and transformational shifts will need to be made across global food systems.

An innovation which could help bring about this step-change is being showcased at the Chelsea Flower Show this week, where NGO Camfed has set up a gold-medal winning garden designed to be “future-proofed” against climate change in developing nations. Called the “giving girls in Africa a space to grow” garden, the exhibit features crops which have been naturally bred for drought, pest and disease resilience. The crops have also been enriched with key vitamins and minerals, in a bid to tackle malnutrition or “hidden hunger”. Crops on display include bio-fortified maize, beans and sweet potatoes.

In order to encourage wider progress in this field, UK’s Department for International Development (DFID) has implemented £100m plan to develop biofortified food crops across Africa and Asia. More recently, it has pledged an additional £33m for the International Potato Centre and HarvestPlus, which will be used to upscale enriched cassava and improve potato supply chain sustainability. 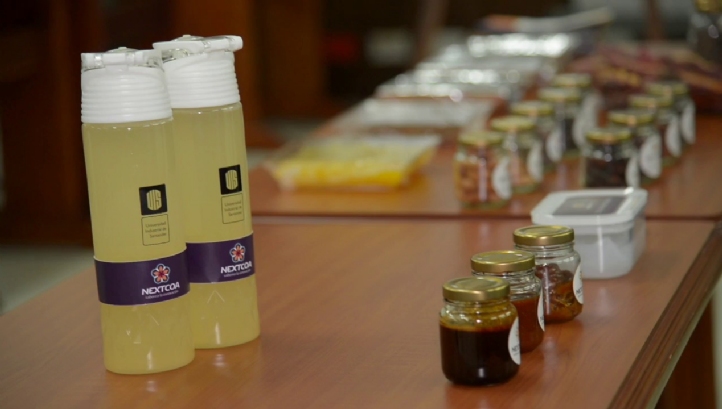 Another of the global food sector’s biggest sustainability challenges is waste. Around one-third of all food currently produced is wasted at some level of the value chain, with experts predicting that this proportion will rise dramatically before 2030 without ambitious action from all stakeholders, from farmers to families.

Innovations seeking to close the food waste loop to have featured in this round-up include technologies which tell consumers when their dairy is about to spoil, or which slow down the spoiling process together. But solutions which target waste at the pre-consumer level are also beginning to emerge, including beer, juice and desserts made using cacao biomass.

The latter of these concepts was unveiled this month by the chemistry department at the Industrial University of Santander in Bucaramanga, Colombia, where professors have been working to replace the cane sugar, milk and soy lecithin found in a typical chocolate bar with sweeteners and emulsifiers derived from the cacao fruit, which is typically wasted.

The innovation could be significant in reducing waste in the cacao sector because, for every pound of the plant that ends up being processed for chocolate, 12 times as much biomass is wasted. The closed-loop treat, called Nextcoa, is expected to become commercially available in August and will retail for the same price as existing luxury chocolate.

As growing concerns about the environmental degradation and health risks associated with the mass consumption and production of meat inspire more people to switch to plant-based diets, the Farm Animal Investment Risk and Return (FAIRR) organisation has estimated the alternative protein sector will be worth $5.2bn by 2020.  The early signs of this market transition are well underway, with the likes of Burger King, Gregg’s and McDonald’s all moving to launch meat-free versions of their most popular items.

Smaller innovators are also working on all manner of futuristic lower-carbon protein products, from “eggless” breakfast scrambles to bacon grown in laboratories. Building on this trend, Spanish startup NOVAMEAT has this week begun to showcase what it claims is the world’s first plant-based and 3D-printed alternative to meat steaks. The prototypes are made from a mix of organic rice and pea proteins, blended with algae fibre, and allegedly possess an extremely similar texture to beef steak.

However, they do not yet have the same nutritional profile. Novameat is therefore planning to work with chefs and food development scientists to create a new version of the steaks with more protein, vitamins and minerals before the end of 2020. After that, it is hoping that large-scale manufacturers will use its technologies by 2022 and that many large chain restaurants will be selling its proteins by that time. 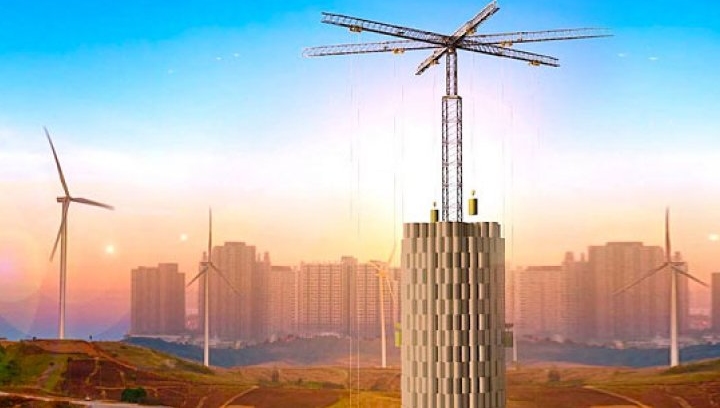 As more renewable energy arrays come online across the globe, and with battery prices plummeting, energy storage is widely regarded as one of the essential technologies for decarbonising the power sector. But with concerns about the technical capabilities of lithium-ion batteries – and the ethical and environmental impacts of the metals used to make them – innovators are now beginning to explore a range of alternatives, from silicon siloes and liquid air facilities to ammonia-based storage.

Another promising innovation in this space comes from Swiss energy technology firm Energy Vault, which has developed a gravity-based energy storage system. The process works by using clean power to winch concrete blocks into the air and stack them, before lowering them in order to generate and release power. It is similar to the method currently used in gravity-based hydropower systems but, according to Energy Vault, is cheaper and can work on any kind of land.

Energy Vault this month received an undisclosed sum of money to scale up its operations from multinational building materials giant CEMEX. The move builds on CEMEX’s recent deal with Energy Vault, which will see the former provide concrete for use in storage towers. 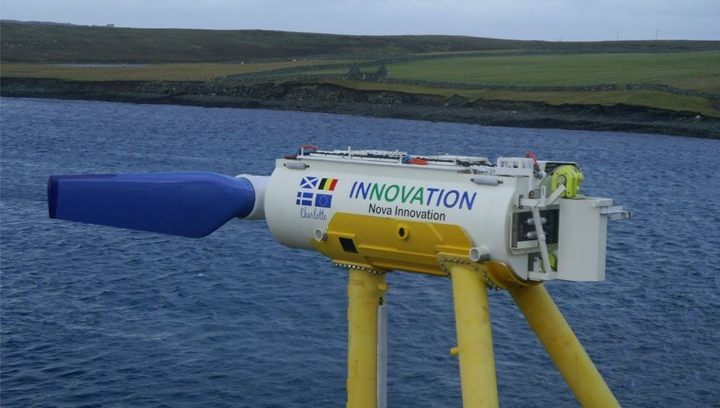 Also on the topic of clean energy, this week saw the launch of a major new innovative European tidal energy project called ELEMENT.

Led by Scottish firm Nova Innovation, the project will use an Artificial Intelligence (AI) platform to learn weather and power generation patterns, which will be used to optimise turbine performance and minimize the need for maintenance and repair. The technology has already been proven to reduce energy costs on offshore and onshore wind arrays, largely through improved generation and reduced lifetime costs.

Nova Innovation has predicted that the use of AI will slash the lifetime cost of the energy produced by the five turbines involved in the trial by 17%. Funded by the EU’s Horizon 2020 research and innovation programme, the £4.4m project will begin in June and run until the end of 2019.